We guide the lower Klamath River for steelhead from August through the first week of November. Our trips are based out of Klamath Glen, just a few miles from where the Klamath meets the Pacific Ocean. We do both day trips and multi-day trips up to Rivers West Lodge. All of our jet boat trips are wade trips and all of our clients fish with spey rods. We catch both adult and half-pounder steelhead on this classic steelhead river. 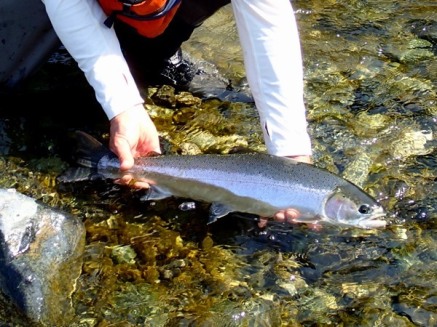 the gate is open…

The Lower Klamath is fishing fair/good with a mix of 1/2 pounders and adults to 4lbs, I jumped a couple of chrome bright steelhead in the 8-10 lb range kin a tailout making there way up river. The mouth of the Klamath is open and fresh Steelhead continue to trickle in, the numbers are down from the average but the pressure on the Lower Klamath is almost nonexistent resulting in some pretty darn good fishing at times ! as well as being some of the best swing water in the Lower 48 !The fishing on the Trinity is similar, a fair number of steelhead, the overall numbers are down but the size is up from typical. The Feds have trapped and released some fairly large Steelhead at the weir in Willow Creek recently.The Swing fishing on the Lower Sac is better then normal for this time of year for wild Rainbow’s and a mix of Wild and Hatchery Steelhead. With a lack of Salmon on Red’s the fish don’t seem to have there typical October tunnel vision of feeding almost exclusevly on Salmon Eggs.

The conditions on the Lower Klamath as are as good as they get right now, the HUGE flows of last Winter have rejuvenated and altered many of the Swing Runs for the better and water quality is good as it gets . The past couple of months the river has seen fresh pushes of adult and 1/2 pounder Steelhead, the numbers don’t appear to be huge…but they’re there !Angler pressure has been low which at times can lead to some pretty darn good fishing as well as a Great overall angling experiance, over the past week we have hooked into, and landed some, Chrome Bright Adult Steelhead and 1/2 pounders as well as Dime Bright Kings, just the right size for a 6 weight Spey Rod.If you are an avid Spey Caster and have never been you should highly consider a trip to the Lower Klamath, there might be different water elswhere but I would argue that there is no better water !…. and if your a novice or just want to try out Spey casting and Swinging for Steelhead, this is an excelent venue for that as well.My schedule is limited this year but I do still have some available dates…and it’s not too soon to plan for next Season , I’ll be on the Lower Klamath from early Sept to late October

I spent three days guiding the Lower Klamath earlier this week, we got into 1/2 pounders each day but failed to connect with any adult steelhead. It rained hard here in Douglas City over night, the rivers are slowly rising with most of the rain soaking in, we might get more run off from the next wave. The Trinity is currently fishable above the North Fork, the Lower Klamath will need a little time to settle back down.

It’s been a while since my last report, a busy building season is now transitioning into what is looking to be a busy guide season. Ive spent time on the Lower Klamath over the last several weeks and the conditions on the Lower Klamath have improved dramaticaly, the river is currently and should remain in Great Shape through the Fall ! Water releases out of Lewiston have increased which have cooled water temps greatly, the Steelhead have responded positively and are now steadily streaming in.We are getting into a mix of adult and half pounders, landing adults to 5lbs and seeing and hooking larger adults to 10 lbs ! I have a few prime dates left in October for the Klamath, if the Fall rains are late the Klamath will be fishable into November. If your passionate about swinging flies for fresh chrome the Lower Klamath should be on your radar.

Just back from a couple days of guiding for early Winter Steelhead on the Lower Klamath, Wednesday fished well with a good mix of wild 1/2 pounder’s and Coastal Cutthroat. We were one day away from swinging up an adult or two but the latest storm hit us hard with wind and heavy rain which left us with a river on the rise at over 500 cfs an hour and was completely blown by this morning. Life of a Winter Steeheader ! The Lower Klamath , in any given Winter, only offers a few brief windows of opportunity for the Spey Angler where Swinging a fly for dime bright Winter Steelhead is realistic, flexibility is key. Feel free to contact me if your interested in Spey casting on some of the most epic swing water in the lower 48 !

With all the doom and gloom out there about water and fishing conditions there is at least one bright spot, the Lower Klamath ! The river is fishing very well, pulses of fresh Steelhead continue flow in and water levels and temps are perfect for swinging a fly ! Fishing should remain solid through the end of October, I still have a few prime dates available.

another day in paradise….

The fishing on the Lower Klamath has been Outstanding ! Plenty of fresh Steelhead moving through the Lower Klamath, both adults and 1/2 pounders, We’ve hooked and landed multiple adults daily and the 1/2 pounders have kept the action steady throughout the day, My client Dick even landed a Chrome Bright Chinook on Monday. There is quite a bit of boat traffic but that is to be expected with the fishing as good as it is, even with the boat traffic I’ve been able to find water a little less traveled. I have some prime dates available for the Lower Klamath early to mid October.

Well the B.O.R. have finally come to there senses and have agreed to start releasing water out of Lewiston Lake to help cool the waters of the Lower Klamath and Trinity rivers in an attempt to prevent another fish kill like the one they orchestrated in 2002 ! http://www.usbr.gov/newsroom/newsrelease/detail.cfm?RecordID=47771

My diggs on the Klamath